- Thomas Alva Edison was a great American scientist and businessman. He made many discoveries in his life, out of which his biggest discovery is considered to be the discovery of the electric bulb.

When they needed money to use in their childhood days, they used to sell newspapers and vegetables on the train to earn money and continue their experiment.

So let's read in today's post about Thomas Alva Edison Quotes in Hindi, which motivates us to move forward and do something new. 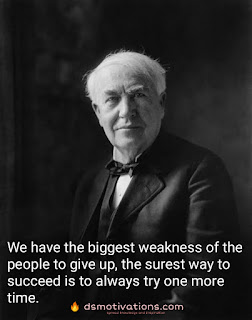 1. We have the biggest weakness of the people to give up, the surest way to succeed is to always try one more time. 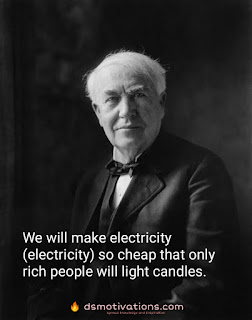 2. We will make electricity (electricity) so cheap that only rich people will light candles. 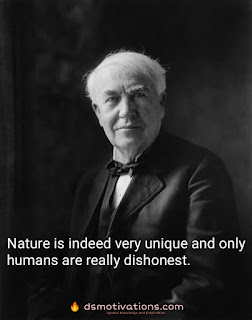 3. Nature is indeed very unique and only humans are really dishonest. 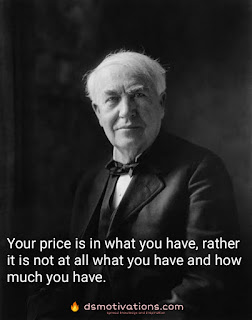 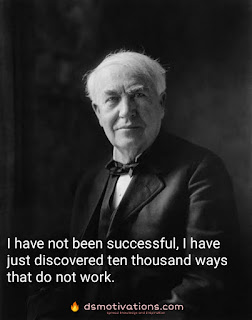 5. I have not been successful, I have just discovered ten thousand ways that do not work. 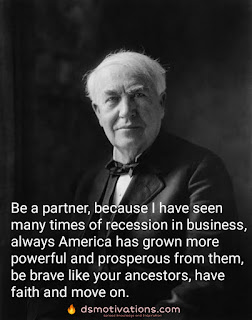 6. Be a partner, because I have seen many times of recession in business, always America has grown more powerful and prosperous from them, be brave like your ancestors, have faith and move on. 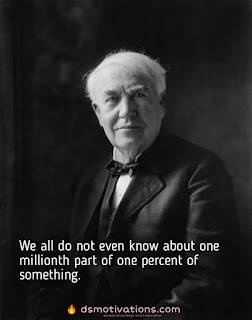 7. I know that this world is governed by infinite intelligence, whatever is around us, whatever exists, proves that there are innumerable rules behind it, this fact cannot be denied, It is mathematical in your accuracy. 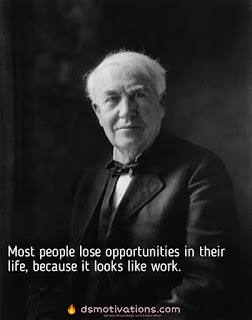 8. We all do not even know about one millionth part of one percent of something. 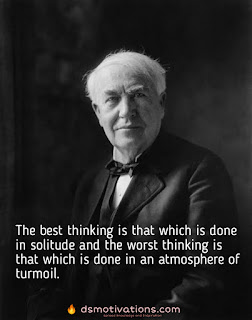 9. Most people lose opportunities in their life, because it looks like work.

11. There are many people who have failed in life, who do not know how close to success they were when they gave up.

12. I would not like to invent something which cannot be sold, its selling is a result of utility and utility is successful.

13. Any success consists of one percent inspiration and 99 percent perspiration.

14. Best thoughts are produced in our muscles.

15. I am proud that I never invented weapons to kill anyone.

16. Being too busy does not always mean work in reality.

17. The person who searches for an idea works on it until it seems impossible and then he gets frustrated, this is not the place where to be disappointed.

18. If we do everything that we are capable of, then we will really surprise ourselves.

19. We can achieve any major goal, if we have three essential elements, knowledge, determination and hard work.

20. To invent something you need a good imagination and a pile of junk.

21. I first find out what this world needs, then I move ahead and try to invent it.

22. Non-violence leads to the highest morality which is the goal of gradual development until we stop harming all other living beings.

23.The value of an idea lies in its use.

24. There is no other alternative to hard work.

25. I did not work for a single day in my life, it was all entertainment.

26. Who can make a human mind, he can control the character of a human being.

28. You are the only person who will decide where you want to go.

29. Without passion you will not have energy, without energy you have nothing.

30. It is the relentless effort to achieve something that matters, even after thousands of failures, trying is the true effort for success.

31. Our biggest weakness is to give up, the surest way to succeed is to always try once more.

33. Whatever we are, we see it in our work and every problem becomes simple after getting solution.

35. Learn with both your head and hands

37. If you want a great idea, then you think of many ideas.

38.Never get discouraged if you fail. Learn from it. Keep trying.

40. Not everything of value in life comes from books- experience the world.

41. "Just because something doesn't do what you planned it to do doesn't mean it's useless."

42."Our greatest weakness lies in giving up. The most certain way to succeed is always to try just one more time."

43."There is no substitute for hard work."

46. "If we did all the things we are capable of, we would literally astound ourselves."

47. "Opportunity is missed by most people because it is dressed in overalls and looks like work."

48. "The three great essentials to achieve anything worth while are: Hard work, Stick-to-itiveness, and Common sense."

49. "Maturity is often more absurd than youth and very frequently is most unjust to youth."

50. "Genius is one percent inspiration and ninety-nine percent perspiration."

52. "I have friends in overalls whose friendship I would not swap for the favor of the kings of the world."

53. "Being busy does not always mean real work. The object of all work is production or accomplishment and to either of these ends there must be forethought, system, planning, intelligence, and honest purpose, as well as perspiration. Seeming to do is not doing."

54. "I never did anything by accident, nor did any of my inventions come by accident; they came by work."

55. "Everything comes to him who hustles while he waits."

56. "To invent, you need a good imagination and a pile of junk."

57. "Nearly every man who develops an idea works it up to the point where it looks impossible, and then he gets discouraged. That's not the place to become discouraged."

58. "Waste is worse than loss. The time is coming when every person who lays claim to ability will keep the question of waste before him constantly. The scope of thrift is limitless."

59. "Hell, there are no rules here - we're trying to accomplish something."

60. "Be courageous. I have seen many depressions in business. Always America has emerged from these stronger and more prosperous. Be brave as your fathers before you. Have faith! Go forward!"

61. "Restlessness is discontent and discontent is the first necessity of progress. Show me a thoroughly satisfied man and I will show you a failure."

62. "The chief function of the body is to carry the brain around."

64. "Many of life's failures are people who did not realize how close they were to success when they gave up."

67. "There will one day spring from the brain of science a machine or force so fearful in its potentialities, so absolutely terrifying, that even man, the fighter, who will dare torture and death in order to inflict torture and death, will be appalled, and so abandon war forever."

70. "Show me a thoroughly satisfied man and I will show you a failure."

71. "One might think that the money value of an invention constitutes its reward to the man who loves his work. But... I continue to find my greatest pleasure, and so my reward, in the work that precedes what the world calls success."

72. "Results! Why, man, I have gotten a lot of results. I know several thousand things that won't work."

73. "Anything that won't sell, I don't want to invent. Its sale is proof of utility, and utility is success."

74. "There is far more opportunity than there is ability."

75. "Great ideas originate in the muscles."

76. "When I have fully decided that a result is worth getting I go ahead of it and make trial after trial until it comes."

. I write an article related to Suvichar on this blog, if you like the information shared by me, then share it with your friends on social media. 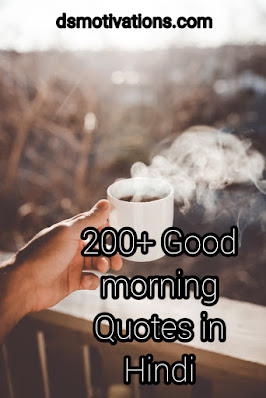 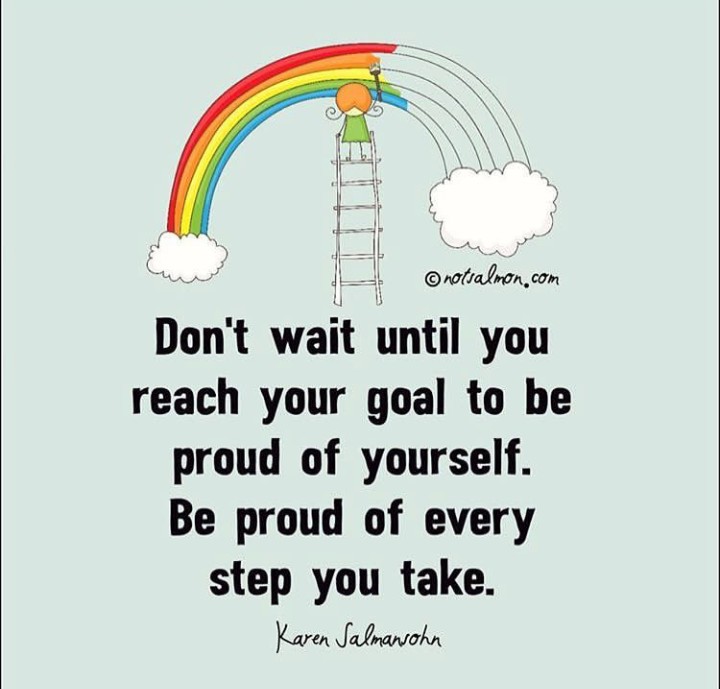 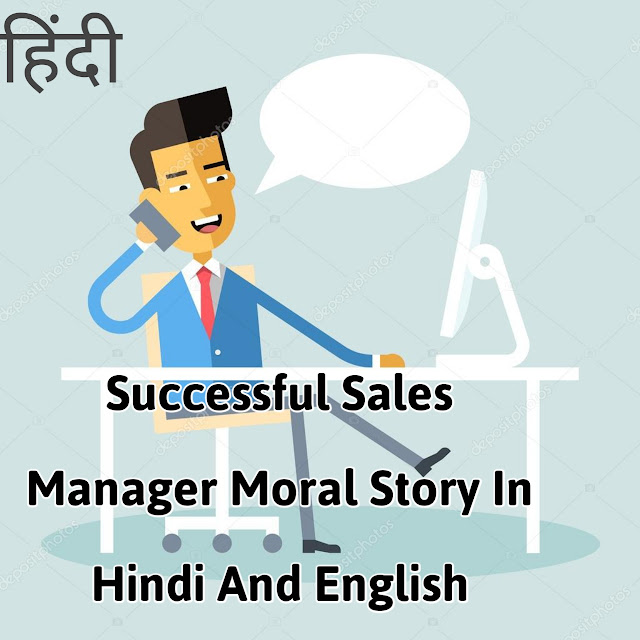